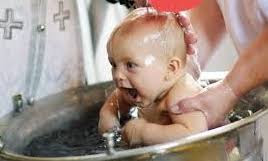 This sermon departs from the lectionary on this day because I need to preach from Acts as an assignment for my Doctoral studies.

I love a baptism. You all know that. I love the celebration. I love throwing the water around, I love the scent of the oil. I love that together, in the midst of community, we acknowledge that each and every one of us is a precious child of God, and that in some mysterious way that none of us can describe or imagine, God shows up with us, God makes us into community and we are made into a new creation. And I love the party, because, there’s always a party, with cake.

In this story from Acts baptism and hospitality are the response to many things that come before. Paul and Silas are wrongly accused and thrown into prison, they sing hymns, a miracle earthquake frees all the prisoners, the jailer contemplates suicide rather than face the dishonor of having allowed the prisoners to escape, Paul and Silas share the good news, and in response, the jailer and his entire household is baptized and the jailer takes everyone home and tends to their needs, including feeding and healing.

So much is happening in this story, but what I’d like to focus on today are two things, what did the jailer hear and see that caused his transformation and subsequent baptism, and what does that have to do with food and healing.

This jailer lived in a world in which his career and professional prestige are based in his job performance, and this thing that happened that set all the prisoners free, laid all of that to ruins. As far as he was concerned, he was already done for and was contemplating suicide. Paul stopped him, and the jailer asked Paul and Silas what he could do to be saved. Most likely, he wasn’t asking about eternal salvation, he was asking them how he could get out of this disgrace alive. But Paul and Silas must have answered him with a compelling story about Jesus, because at its conclusion, the jailer chose for himself and his entire household to be baptized.

What do you think that jailer heard?

Just imagine Paul, inviting the jailer and all who were related to him, to sit down, and listen. And then Paul tells them everything about Jesus. Maybe Paul’s story went something like this. “There once was someone who did such amazing things and said such wonderful things that people followed him. As they followed him, they heard him talking about a kingdom, but it surely wasn’t like the kingdom that they lived in. It wasn’t like any kingdom they had ever visited. It wasn’t even like any place they had ever heard of. So, they couldn’t help it, they just had to ask, what is this kingdom of heaven like? And Jesus said, it’s a kingdom in which people love their neighbor and even the one’s they do not know. And it’s like when we all sit down at table together, and everyone gets enough to eat and to drink. And Jesus said, share this meal of bread and wine and know that I am with you and among you, do this in remembrance of me, and know that in this meal, in this bread and this wine, in my broken body and blood which is raised up, you are healed.”

We can’t ever really know what Paul and Silas said to the jailer. But surely it was about God’s power and God’s faithfulness. It is a story that changed Paul. It is a story that Paul tells that changed that jailer’s life. He was freed from the shackles that held him prisoner. He heard the good news that the value of his life did not depend on the manner in which the Roman government regarded it. For this jailer life was all about honor and prestige, not anymore. He heard the good news that includes the freedom to be obedient, to be authentic, in spite of all that society may expect of him.

How do we hear the story of Jesus, who is God in the flesh, who lives and dies and rises from the dead? Does it change us, as it changed Paul, as it changed the jailer in this story? Because what Acts narrates for us is a story about being freed to live an alternate existence as an alternate society, today we call that the Jesus movement. Acts shows us that the Roman empire does not offer a community of care, and of healing, of mercy and justice, only this community of followers of Jesus does that. And this new community is a community of rejoicing.

This good news caused the jailer and his whole household to receive Jesus. What a great thanksgiving that party must have been. Baptism and hospitality, thanksgiving, sacrament, healing. They are linked. Rejoicing is a response to the gospel. The word Eucharist means thanksgiving, and so what we do together, in this community, every time we gather and even when we are far apart, is to be thankful that we are transformed, made new, in our relationship with Jesus and with others. And we give thanks that we are made in God’s image, that we are baptized into the life, death, and resurrection of Jesus. And we are freed to dine at the table of hospitality, to eat the broken bread which is broken body, and the spilt wine which is blood poured out, the body and the blood, the bread and the wine that makes us whole, that puts the fragments of our lives back together again, that heals us. What other essential activity could be more profoundly sustaining and healing?

Peter and Paul, in the book of Acts, were called to proclaim the Good News of God in Jesus to the ends of the earth. And there was much rejoicing, eating, feeding, healing, and even partying in response to that Good News. Peter and Paul were some of the earliest Jesus followers, they were some of the first of the Jesus movement. You and I are part of that Jesus movement, 2019 years later, and as followers of Jesus, we too are called to proclaim the Good News of God in Jesus. Inside these walls, we proclaim that Good News by welcoming all to this table, to be fed, to be healed. And, outside these walls, where being church is actually lived out, we do the same. We feed people, we feed them with meals delivered, we feed them with meals cooked and served, we feed them with our donations to ECHO and Salvation Army. And we feed them with love, and care and compassion. And in the feeding, we are all made whole once again, our broken lives are put back together, our broken hearts mended. Thanks be to God.
feeding healing rejoicing

Popular posts from this blog 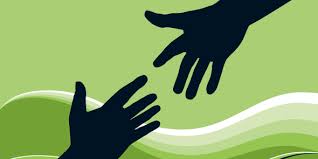 Here's another parable, and they sure don't get any easier. Every time we hear a parable, we ask ourselves again, what is this really about? What is the kingdom of God like? What does this show us about God? And, there never is just one answer to any of these questions when we hear a parable, there are multiple answers and multiple levels. In this parable today, I want to consider a possibility.  I think this parable is not about God being like the judge, but much more like God being like the persistent widow. I think this parable is about God's hearts' desire to be in relationship with you and me.

At the center of the relationship with God is prayer. That is what this parable is about. Jesus is telling the people who have gathered to listen to him, to pray always and not to loose heart. Prayer is one way God communicates with us. Sometimes people wonder about prayer and what good it does. Sometimes people are frustrated be…
Read more 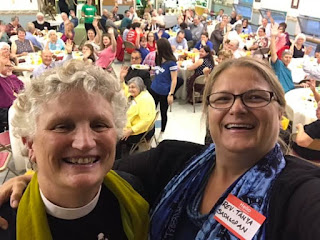 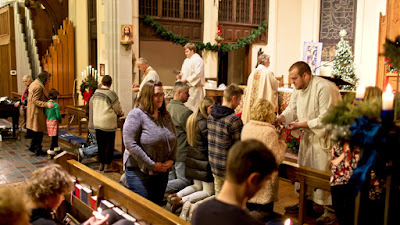