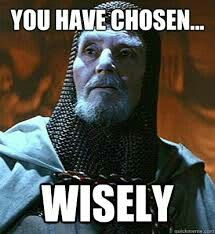 The Feast of Christ the King is a great paradox. Christ, whom we claim as King, who never claimed that for himself. Christ the King. Just listen to it, Christ the King. Jesus, the baby born in a barn to parents of no status or honor, who spent his life with no roof over his head, always on the road, foraging for his next meal. Whose message is consistently, love one another. Jesus, whose friends were never quite sure of him, and whose reputation was suspect as far as those who had power were concerned, the scribes and Pharisees and others who ranked high at the temple. Jesus, whose life ended, hung on a Roman cross, the most degrading, torturous death imaginable. Jesus, the King.

For me a helpful image to illustrate this paradox is in a movie, Indiana Jones and the Last Crusade. That's the one where Indiana Jones goes to seek the Holy Grail, the cup that Jesus drank from. Remember, Indy and his dad and the bad guys found the ancient knight guarding the cup, Indy had to find his way through the maze that could kill him. When he got there, there were many choices, gold cups, platinum, silver, terra cotta and wood. The old knight who has guarded the cups for ages says, "You must choose, but choose wisely, for as the real grail brings eternal life, the false grail brings death". The bad guy comes in and chooses a glittering golden cup. "Truly the cup of a king", he says, and drinks from it. Shortly later, with several horrific transformations, he deteriorates and turns to dust. The knight looks at them and simply says, "He chose poorly". Indy then selects a wooden cup "The cup of a Galilean carpenter" he says, and with much fear, having seen the results before, drinks from it. "You choose wisely,” says the knight.

The cup of a King, or the cup of a Galilean carpenter. Throughout history we've wanted so desperately to make Jesus into a cultural King. Pilate asked him, "So you are a king?" Jesus answered, "You say that I am a king." And then Jesus continues, "for this I came into the world, to testify to the truth. Everyone who belongs to the truth listens to my voice." We want Jesus to sit on a throne and judge. Often, we want Jesus to sit on a throne and judge others deemed not worthy of life in Jesus' kingdom. Especially those who we think do not deserve the kind of Love Jesus offers us. Love, unconditionally, no matter what, unless, of course you disagree with me, or are different from me. Unless of course you've done something dastardly. Unless of course you love someone of the same gender. Unless of course you believe in a different God I believe in, or don't believe in God at all.

Kings and thrones, judgment and justice, forgiveness, mercy and compassion. What is the truth that we hear from the voice of Jesus? Love the Lord your God with all your heart and your mind and your soul, and love your neighbor as yourself. Feed my sheep, clothe those who have nothing to wear, visit the imprisoned. The Good News is that no matter what or who we want Jesus to be, Jesus loves, and Love wins. Kingship, for Jesus, is about being a king that serves, that sacrifices, and that loves radically. A king that looks the complete opposite of virtually any king any of us has ever read about. Jesus, whose example is humble, not glorified; generous, not treacherous; hospitable, not exclusionary. The cup of a king, or the cup of a Galilean carpenter?

Kingship, or something like it, was all the people knew about ruling a people. It was either a King, an Emperor or some such ruler who lorded over the people, or it was chaos and anarchy. The God the Jews knew brought order out of chaos, this Jesus who was said to be God's son, therefore was King. But the Kingdom is of mercy and compassion, the Kingdom is of peace and reconciliation, the King knows each by name.

So it is this paradox that we must somehow reconcile in our own lives. The cup of a King, or the cup of a Galilean carpenter. Choose wisely my friend. But I think the wisest choice is not one over the other, but it is the Episcopal way, the via media, it is somewhere in between. We must hold both realities in tension. Christ the King, whose throne is a cross, and when we do, we see a fuller picture. We bandy about that image, Christ the King, on a throne, the seat of judgment. But do we really have any idea what it means? Jesus indeed sets out a standard of judgment, an expectation if you will, but this King shows us the way, this King doesn't leave us alone to figure it out ourselves, and it is right here that our lives our transformed.

We are changed through the realization that each one of us is loved completely and absolutely, that is the truth of Jesus' life, death, and resurrection. We are changed through the realization that when we fall short of the kind of love Jesus demonstrates for us, and we will fall short, that is part of being human, and we are forgiven. Just like Peter, who denied Jesus three times. Forgiveness takes practice, not just once, but time and time again. Not even just until we get it right, because it's not about getting it right. Only trying to get it right just makes us into self-righteous snobs and misses the point of Jesus' kingship entirely. It's about responding to hate with love, it's about seeking reconciliation not revenge, and when we don't, because we won't, it's about asking for forgiveness, again. We are changed through the realization that Love wins, every time.
- November 24, 2018 No comments: 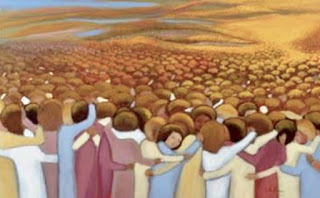 The Feast of All Saints is a celebration of family, a household celebration, and a celebration of all our relations. It is about the cloud of witnesses, the communion of Saints. It is about Lazarus and Martha and Mary and the witnesses that stood at Lazarus' tomb and watched Lazarus come out, and those in the stories we have been reading for weeks now, the witnesses whose names we spoke aloud in this morning's litany, and the witnesses that sit right here beside us in these pews. And it is about baptism, it is about Theo’s baptism, and it is about your baptism. For in your baptism your creation as God’s beloved is realized, you are already one in the communion of Saints.

Oh, James and John, stand here beside us. Show us how the first will be last and the last will be first.

All the saints of God, stand here beside us. Show us the way in front of us. Our passage from Revelation shows us the way. It gives us a glimpse of the world God dreams for us. God will dwell with God’s people, and will wipe away every tear from our eyes. Death will be no more; mourning and crying and pain will be no more, for the first things have passed away. All things are made new. You see, this celebration of All Saints, this baptism of Theo, reminds us that, painful though it may be, we need not fear death. Death brings grief and sadness, absolutely. But this celebration, as well as all of our celebrations at the altar, reminds us that death does not have the last word. So even through our tears and sadness, we will make our song, 'Alleluia Alleluia Alleluia.'

Feast of Pentecost Yr A May 31 2020 (Sunday after the murder of George Floyd, riots in Minneapolis)